When I checked my inbox on the Friday afternoon of November 17th, I went into absolute shock…

I got an e-mail back from Professor Zelig Eshhar of the Weizmann Institute of Science.

It is one of the leading research universities in the world.

It is also the home of three Nobel Prize winners, and three Turing Award laureates.

This institute houses some of the smartest people on the planet.

Getting one of these brilliant minds to reply to an email is an achievement in and of itself. But getting an exclusive meeting? Well, that’s like winning the lottery. It’s that rare.

But that’s exactly what happened to me.

A few weeks earlier I sent Professor Eshhar an e-mail.

I asked him if he’d give me ten minutes of his time to meet. He responded to my email with one word, “Granted!!!”

His breakthrough is so monumental, there is SERIOUS talk of him winning the Nobel Prize for Medicine.

I met Dr. Eshhar at the Tel Aviv Sourasky Medical Center, the largest acute care facility in Israel, which treats over 400,000 patients per year.

Now, because I’m a former $200 million Wall Street money manager, I’ve had the pleasure of meeting and picking the brains of some of the world’s smartest individuals.

Having the opportunity to interview the man that could be the next Nobel Prize winner is an absolute honor.

He’s extremely busy so I would have been happy with a 10-minute meeting. Instead, we hit it off. We sat and talked for more than three hours! 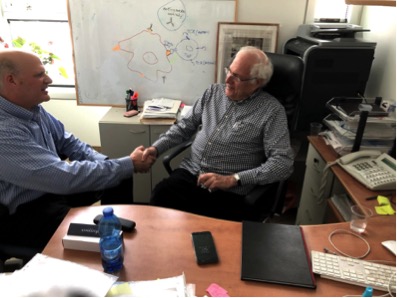 In 2015, he was the recipient of The Israel Prize. It’s the nation’s most prestigious honor, awarded to those who have broken new ground in a certain field.

Possibly the Biggest Breakthrough in the Fight Against Cancer

He’s came up with a new, radical way of looking at things… a new approach to treating the world’s deadliest disease.

He’s a pioneer in the fight against cancer.

But he’s an incredibly humble individual…

“I was just following the giants,” says Dr. Eshhar.

He’s studied under the smartest individuals in medicine, many of whom are Nobel Prize winners themselves.

And now his breakthrough methodology is causing an amazing revolution in cancer therapy.

Oncologists throughout the entire world are singing its praises.

In fact, multi-billion dollar pharmaceutical juggernauts Novartis and Gilead Sciences just got approval to use this treatment outside of clinical trials. That’s how revolutionarily promising it is.

But there’s one smaller, less-known firm that stands head and shoulders above the rest… and it’s poised to dominate this emerging field.

Even JPMorgan is calling it “one of the more potentially transformative companies we’ve come across in some time.”

I believe a stake in this company today could create the kind of wealth that lasts for generations.

So let me very blunt about this opportunity, because it’s that important.

For decades, drug companies have been spending billions of the dollars and countless hours researching and developing treatments and cures for cancer.

The reason is easy to understand.

Cancer is the #2 leading cause of death. It kills nearly 600,000 people per year in the U.S. alone. Another 1.6 million new cases will be diagnosed.

A cure for cancer is the holy grail in the healthcare industry. And the company that does it will immediately become the most valuable company in the world. And its stock will reach dizzying levels.

You don't want to miss out on the opportunity to know the name of this cancer-fighting company.