I hate going to Costco.

You know the deal. The parking is terrible. The store's way too crowded, even though it's a giant warehouse. And the checkout lines are so bad that the military could weaponize them.

But this is the real kicker: I don't think I'm actually saving any money by shopping at Costco.

I don't walk out of Costco without having spent at least $100. Most times, I've spent over $200. And I live alone. I buy food and things for myself: No wife, no kids, and I don't even have to buy for a pet.

It's a $100-plus trip. And the whole experience just all-around sucks. But here's the thing: I won't stop going to Costco.

Maybe it's because I like buying in bulk. A pack of paper towels from Costco will last you months. It sells coffee creamer by the gallon. Need a quarter-ton of bacon right now? Costco has you covered. All that's pretty efficient.

Or maybe it's because I'm a sucker being reeled in to save a few bucks. Either way, I won't stop shopping at Costco.

And I'm clearly not alone. Membership to Costco has increased by 26% over the past five years. Today, the company has almost 50 million members. And it feels like they all shop at the same Costco that I do.

From business owners to college students, everyone shops at Costco. And for investors, Costco has been a windfall.

Costco Wholesale Corporation (COST) shares have increased by more than 100% over the past five years. When you include dividends, shares of COST have outperformed the Nasdaq since 2013.

Costco is doing something right. It's had consistent increases to both its net sales and operating income over the years. And today, it has plenty of cash and assets on hand and manageable debt. Overall, the company's finances are solid: 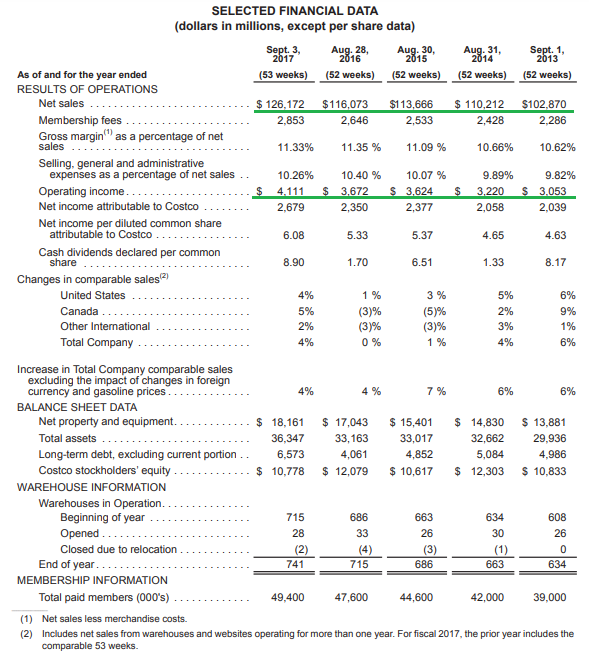 Should You Be a Buyer Ahead of the Results?

The market expects Costco to report annual earnings per share (EPS) of $6.80. That's an increase from last year's reported EPS of $6.08.

It all looks good. And there's a good chance that Costco's results will beat expectations. They always do.

But here's the thing: Shares of Costco tend to decline after financial results. And it doesn't matter if the results are good or bad. Shares of COST tend to pull back after earnings reports regardless.

Costco has large analyst following. Over 70% of COST shares are owned by large investment houses. And these institutions tend to "sell the news," rather than buy it. That contributes to a decline in share prices on announcement day for Costco. But long term, the company looks solid.

Membership continues to rise. Increases in net sales and income are common. And the company continues to expand with new warehouses every year. I may hate shopping there, but the business looks rock solid.

Costco shares were a bit higher this morning, trading at $236.50. COST has pulled back from a 52-week high, and all-time high, that it set a month ago at $244. And we could see more of a drop on Friday after the financial results. But that could also create a good entry point for long-term investors.

Put Costco Wholesale Corporation (COST) on your watch list. It could be a great time to buy for the long term.

P.S. As you may have seen, Charles Mizrahi presented the Insider Fortunes Summit last week. During this live webinar, he discussed how he leverages his network of insiders to access ideas that the general investing public can't. And he talked about how he's developed a strategy proven to zero in on stocks that could give you triple- and even quadruple-digit gains. If you missed the summit, you can check out the video here or take a look at the written transcript here.