Buy the Blood; Sell the Celebration

Baron Rothschild, 18th-century English nobleman and member of the great Rothschild banking family, is often credited with giving us the legendary contrarian mantra: "The time to buy is when there's blood in the streets, even if the blood is your own."

But with all due respect, I'd like to suggest an addendum to that quote...

And with the Nasdaq and S&P 500 breaking record highs, it's becoming one big party on Wall Street...

Buy the Blood; Sell the Celebration

In plain terms, Rothschild simply meant "buy the bottom." Although for him, there had been literal blood in the streets. Rothschild made a fortune after he bought into the panic that followed the Battle of Waterloo.

Of course, buying the bottom doesn't work out for investors 100% of the time. For example, the guy who was the last to invest in the Pet Rock was left with a white elephant. But in general, it's best to buy the bottom.

Does that mean I think the equity markets have topped?

No, not yet. There's no celebration in the streets just yet.

But the stock market euphoria is rapidly growing as major U.S. indexes break into new territory. And that elation might be a sign that we're close to a top...

Investors are happy, and the mainstream financial media is all smiles. CNBC's Fast Money tweets: 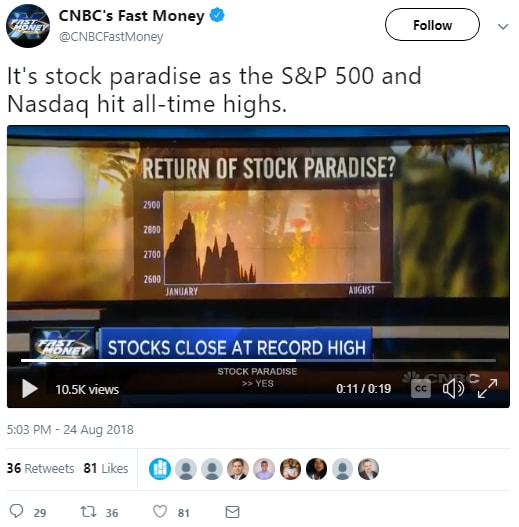 The celebration is growing. And that makes me a bit weary...

In a 2006 study, titled “Behaving Badly,” researcher James Montier found that of the 300 professional investment fund managers he'd surveyed, almost 75% believed that their job performance was “above average.”

You don't need to be a mathematician or statistician to figure out that this is impossible. And it shows that fund managers often display irrationally high levels of confidence.

Individual investors like you and me can also be subject to overconfidence. Don't believe it can't happen to you.

Right now, the U.S. markets are rallying amid a trade pact between Washington and Mexico. The Nasdaq and S&P 500 have gotten an extra push from tech and growth stocks. But the smart money is beginning to move away.

I don't think that U.S. equity markets have topped yet. But the increase in market euphoria is a sign that we should begin looking to take profits where it's appropriate.