“Netscape changed the internet — and the world…”

December 15, 1994, should go down in history as a day that changed the world forever...

It was the day that Netscape released its first web browser. 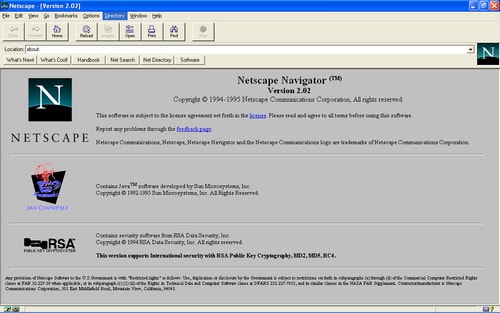 Netscape made it easy to surf the web.

By today’s standards, its browser was about as functional as a Ford Model T automobile.

But when the browser first came out, the web wasn't accessible to everyone with a computer.

It also opened up a new economy that's since produced trillions of dollars.

Without an easy way to browse the web, there would be no Google, Facebook, and Amazon.

And the combined market cap of just those three companies is close to $2 trillion!

Disruption and the Law of Accelerating Returns

The internet has changed our lives and the world.

It's made it so an endless amount of information is now at our fingertips.

It took no time at all for advertising firms and businesses to see the amazing potential that the internet could have on their bottom lines.

It was a technological revolution.

In 1998, only a few years after Netscape launched its browser, two college students formed Google.

Users needed a way to find things on the web.

Getting in early on technology that will change the world is the slam dunk to making money...

The Next Slam Dunk

There’s a technology that has a lot of momentum right now. And it’s just getting started. In fact, it's a mega-trend that will end up dwarfing the rise of the internet.

With technology, what you need to realize is that being ahead of the trend is what will make you rich.

Imagine if you invested in Google in 1998… Your life would have been changed forever.

Now, it’s time to make a slam dunk of your own.

I was talking about artificial intelligence (AI). And the opportunity for this technology is endless.

By 2021, AI will increase global business revenues by $1.1 trillion.

And it will give a huge boost to the global economy by creating 800,000 new jobs that’ll be powered by AI.

That explains why Bank of America recently mentioned that the AI market would blossom to $153 billion over the next five years.1

AI will infiltrate our daily lives in multiple ways. It'll have a huge influence on the entire world. And so far, China has been contributing more to AI development than the U.S. has.

AI will be big — probably bigger than any industry we’ve seen to date...

The Singularity Is Here

The mega-trend is the reason that I added Xilinx (XLNX) to the portfolio back in September 2017. If you're underinvested or missed out, I recommend buying Xilinx for up to $80 per share.

I’m currently looking at a few more stocks that will benefit from AI.

I have a few selections in my on-deck circle. But I’m not ready to pull the trigger just yet — I’m still waiting for a pullback in price.

If it should sell off and trade at my trigger price, I’ll shoot you a quick update.

And with more than 35 years of recommending stocks under his belt, Charles has knocked the cover off the ball, compiling an amazing record of success and posting gain after gain for his loyal readers. He is the founder of Park Avenue Investment Club and the Insider Alert newsletters.

1 Here are a few projections on how much AI is going to generate. The numbers are staggering!