Buying the Next Apple

Not one kind word...

The financial media had been writing about this company as if it were going belly-up.

Wall Street had enough and tossed this company in the unloved and unwanted pile.

It didn’t care that the company had a Rock of Gibraltar balance sheet or that it was selling for a bargain-basement price.

That’s because Wall Street was looking at only one thing: How many products the company had sold last quarter.

And its best guess was "not enough."

Institutions and hedge funds were dumping the stock.

I watched from the sidelines as the stock price fell by close to 30% within only two months.

I patiently waited on the sidelines with my finger on the trigger. But instead of selling, I was looking to buy... 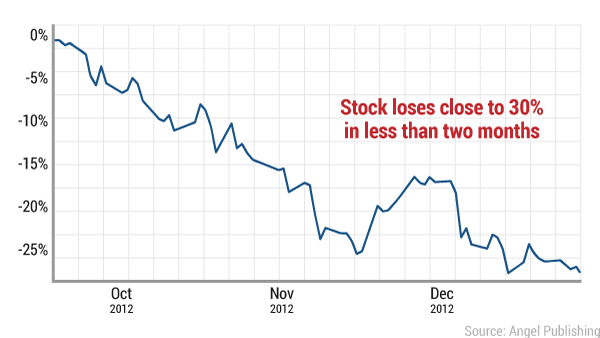 We added the stock to the portfolio at a price of $65.32, adjusted for dividends and splits.

The company was Apple Inc. (AAPL).

Apple also recently reached a milestone: It became the first U.S. company to have a market value of more than $1 trillion.

And since we added it, I've told my readers that the stock is still selling too cheaply.

I never once issued a "Sell."

Instead, I kept giving new "Buy" prices for readers who'd missed out or had been underinvested.

If you had Apple in your portfolio, congratulations. If you missed it, it’s still selling at a great price...

When I recommended Apple, it was obvious to me that Wall Street had taken its eye off the ball.

The long-term story wasn't the number of iPhones it would sell this quarter or next quarter...

But instead, the real money over time would be driven by Apple’s services category. And this category was where I saw large growth opportunity.

The margins are huge for services. For example, Apple collects around 30% on each dollar of every app sold.

CEO Tim Cook said he feels great about the momentum in the services business and that Apple is “thrilled” with its upcoming product pipeline and new services. And so am I...

That’s the type of insight members pay me for. After being on Wall Street for more than three decades, I've learned a thing or two about how this game is played.

And that insight has given us gains of...

And all these stock are still in our portfolio with the potential to move even higher!

These selections weren’t flashes in the pan or one-hit wonders. I only recommended them to members after I spent hours researching the companies and trying to figure out “what was Wall Street missing?”

And once I got my answers, well, the results speak for themselves...

The Next Bargain Buy

Most of the time, Mr. Market prices stocks efficiently. But other times, Mr. Market screws up.

I’ve been following a company for the past year, and I'm seeing an attractive entry point.

This company is a collection of some of the oldest and most storied American industrial companies with products that range from aircraft engines to elevators.

It’s considering splitting the businesses, which, as my research is showing me, is a great idea. Splitting up the company will unlock a ton of shareholder value. Managers would be able to focus more time on each company. It would also provide more transparency into each company’s financials. And most importantly, it would drive the stock price much higher.

This company also has one of the most efficient operations in its industry. I have a full write-up on it in the latest Park Avenue Investment Club issue. Find out how to gain access now.