"The first principle is that you must not fool yourself and you are the easiest person to fool." — Richard Feynman, Nobel Prize-winning physicist.

During the dot-com bubble of the 1990s, many investors allowed themselves to be fooled.

Companies that were losing money were still valued in the hundreds of millions of dollars.

And instead of earnings, Wall Street started to value companies based on "eyeballs." They counted the number of views a site had. It didn't matter what or how the company made money. And many dot-coms never made a penny.

Many of the companies that had seemingly shown such great promise ended in a puff of smoke. The game was over.

It took more than 15 years before the Nasdaq would make another all-time high...

Smart People Allowed Themselves to Be Fooled

And the latest foolish investment: cryptocurrencies.

If you'd asked 100 investors, "What is Bitcoin, or any cryptocurrency, worth?" 99 of them would have given you a blank stare. No one knew.

But the price kept rising higher and higher each day.

The internet was chock-full of success stories, but it was also a hotbed for scamsters.

The Wall Street Journal analyzed 1,450 cryptocurrency offerings. And it found that close to 20% of them were outright frauds! 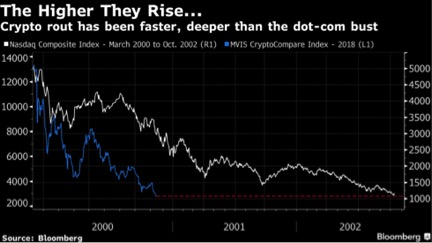 Almost two decades ago, the dot-com craze was in a full bubble. It didn't matter what the company did. If it had dot-com somewhere in its name, the stock went up.

That's exactly what happened to cryptocurrency investors. Investors had been betting on this revolutionary technology. The early investors made money, but the latter ones are suffering a painful reality check: the bust.

You see, this is why I've stayed away:

You don't need to invest in every investment that you hear about or that's popular. To make money, you only need to find and stick to a few simple ones.

I've seen my fair share of boom and busts over the past 35 years. And during that time, my approach has never wavered.

I look for companies that are able to weather any financial storm.

You see, I've made money the old-fashioned way on Wall Street: I find companies that are trading for pennies on the dollar. And then, I back the truck up to buy as much as I can...

Because that's how the big money is made — not by trading fads and manias.

P.S. My publisher, Brian Hicks, convinced me to take part in the first Insider Fortunes Summit. I'll have more to add during this summit on Thursday, September 27th. If you haven't signed up for this free event, I urge you to do so now by clicking here.