Despite what many people think, running a money management firm isn’t that glamorous.

In fact, nothing could be further from the truth...

Our first office was a 400-square-foot room. It had gray commercial carpet that was glued to the floor, and the walls were painted white. It was sterile.

It was also on the seedy side of New York City. Back in the mid-'80s, you'd had to step around the homeless people camping out on the sidewalks to get into our building.

When we first opened our doors, we were in the capital raising stage. This meant performing a lot of dog and pony shows with investors looking to deploy their capital.

Without money to manage, it wouldn’t be long before we’d have to close up shop. So, raising money was front and center.

Between 9 a.m. and 5 p.m., I spent my time cold-calling contacts, following up on referrals, and going to meetings.

But it was after 5 p.m. that the second part of my day started.

That’s when I'd start my research. Most days, we'd leave the office at 9 p.m. And many times, we'd leave much later.

I really enjoyed meeting prospects at their offices to give them my pitches. Even if I didn’t close the account, there was so much to learn.

In fact, one of the greatest lessons I've ever learned was from a business titan whom I’ll call "Mr. Jones." He was worth close to $1 billion. And he was also a really nice guy. He casually taught me the lesson as he walked me out of his office...

Mr. Jones shook my hand and said, “Young man, stop working so hard. Make fewer trades and let the taxman be your friend instead of your partner.”

I'd had no idea what he was talking about.

A few days later, I called him. “Mr. Jones, you gave me advice the other day. To be quite honest with you, I’m not sure what you meant.”

He chuckled, “I figured you didn’t. So, let me explain it in very simple terms...”

Mr. Jones went on to teach me about taxes and the impact they have on returns...

Taxman Gives You a Gift

Before he pointed that out to me, I'd never thought much about my after-tax returns.

But that was without considering how much I'd actually keep after taxes. And that amount would depend on how long I'd held the stock.

I would have to make much more money trading over the short term to equal what I'd make if I held the stock for one year.

In other words, I’d have to work a lot harder and be right a lot more often to make as much money as I would if I just sat on my ass...

A few months after that meeting, I changed my approach.

I no longer tried to buy and sell stocks over a short period of time. Instead, I took positions that I could hold for more than one year.

But there were times when I'd sell stocks with huge gains after only holding them for a few months.

In these cases, I was willing to pay the higher tax rate because I'd made such a quick, unexpected return. I’m not one to look a gift horse in the mouth.

But the biggest gains that we currently have in our portfolio, my followers haven’t paid a nickel for in taxes.

And yes, it's completely legal. And it's because if you bought 100 shares of a stock at $25, you don't have to pay any taxes on it until you've sold it.

The only time you have to pay taxes on the gains is when you sell the stock..

Selling Is Just as Important as Buying 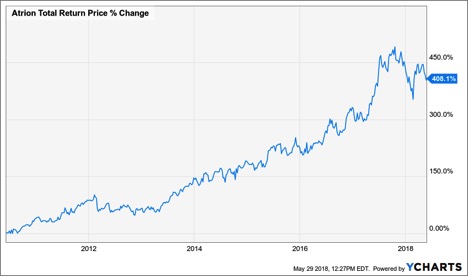 If you haven't sold a single share and have continued to hold the stock, you will have paid $0 in taxes on those gains over the past several years.

HollyFrontier Corporation (HFC) was added to our portfolio almost two years ago. The stock is up by more than 155%. If you haven't sold any shares, you're still paying $0 in taxes on those gains, as well: 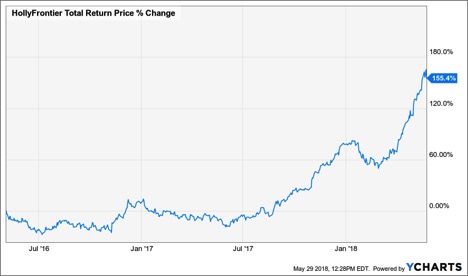 When you do sell it, you'll be taxed at the lower 20% long-term capital gain tax, instead of the much higher 37% ordinary income rate. Basically, you'd keep more of your gain — a lot more.

So Simple, Your Grandmother Can Do It

Trading for the long term, one year or more, puts more money into your pocket. Most of the time, the short term is only noise. Long-term trading allows you to keep more of the gains that you made instead of giving them to the taxman.