His Approach Was Something Investors Should Emulate

During the months preceding the market low in March 2009, there was plenty of low-hanging fruit to pick financially sound companies that were trading at bargain prices.

After I researched a company and was about to recommend it in one of our portfolios, I checked and double-checked my numbers because I thought I had made a mistake.

The market was offering these companies for a fraction of their worth.

I actually found it hard to believe, so I sent an email to a colleague and asked whether he’d go over my work to see if I had made a mistake.

His response was, “Nope, you're right. That's what the stock prices sell for at market bottoms.”

That wasn’t the only time I had to double-check my numbers, either; it happens every time a stock market sells off.

But more importantly, this works well with our approach of buying financially sound companies when they are trading at attractive valuations. During bull markets, finding those undervalued investment gems isn't so easy.

However, our search becomes a lot easier during sideways markets and downturns.

Boston Red Sox outfielder Ted Williams was the last baseball player to have a batting average of .400.

In 1941, Williams batted .406, and since then, only four players have hit as high as .390. Many baseball historians (and I would say I agree) believe that Williams’s record will never be broken.

And investors like you and me can learn a lot about investing from him.

Williams had an analytical mind and was a disciplined hitter. He estimated his batting average in each area of the strike zone and would swing only when the ball was in the area where he had the highest probability of getting a hit. 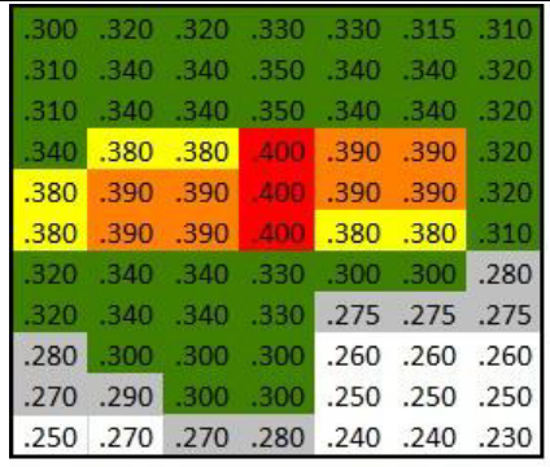 He calculated that if the ball were thrown right down the middle (red zone), he would have a .400 batting average. If he swung at pitches in the lower-right or left-hand corner of the strike zone, he figured his average would plunge.

The differential is extreme.

In his best zone, he hit .400, and in his worst zones, he hit just .230, for a difference of .170. Baseball historians have surmised that there were seasons when Williams could’ve notched another season of hitting .400.

Instead, Williams refused to expand his strike zone. He would rather walk than swing at a pitch that could lower his average.

His analytical mind and discipline, along with a great swing, made him the last player to hit .400.

From Strikeouts to Stock Trades

It involves discipline, coupled with analysis.

We don’t use a strike zone as our guide and swing only at the pitches down the middle.

Instead, we use a bull's-eye and invest in only those stocks that are financially sound and trading at bargain prices.

Any stocks that pass one but not the other criterion, we don’t invest in.

At the end of the day, after we find financially sound companies, it comes down to the price we pay.

Howard Marks of Oaktree Capital said, “The greatest risk doesn’t come from low quality or high volatility. It comes from paying prices that are too high. This isn’t a theoretical risk; it’s very real.”

All it requires now is discipline and patience.