I Found the Next Warren Buffett (You’ll Never Guess How)

My socks were so wet, I could hear a “squish” with every step I took.

When I set up my own money management shop, I was in for a rude awakening.

Reality quickly slapped me in the face.

I’d thought managing money for clients would be a glamorous business.

But I guess I’d been watching too many Wall Street movies, because the reality was much different.

My plan had been to get into the office before the stock market opened and to spend the next 10 hours at my desk doing research.

If you’re running money for clients, you spend a large part of your day trying to gather assets. That’s the simple truth.

You could be the greatest investor, but you’d still need to pound the pavement. If you don’t have any assets to manage, you can’t charge management fees. If you don’t charge fees, you won’t be able to pay the rent.

I’d had no choice. My research time started after my client meetings ended, usually at 5 p.m. Then my research time began and ended sometime around midnight — each and every day.

That first year was grueling.

I'd just turned 23 years old and had been on Wall Street for just shy of two years. The track record that I could legally show prospects was less than six months old.

After endless phone calls, I finally got an appointment with a CFO of a small company. My plan: Pitch him on allocating a portion of the company's pension plan to my management. He listened to my whole pitch without saying a word.

When I was done, he smirked and said, “My gardener has more experience than you. Call me when you grow up.” Then, he got up and walked me to the door.

It felt like I'd just been hit with a two-by-four across the side of my head.

Trying to save money, I'd been avoiding taxis. Instead, I walked to all my meetings.

One March day, when I was meeting with a client, it started snowing.

New York City streets get messy very fast. The snow turned to slush before even hitting the ground.

What My Cheap Shoes Taught Me About Investing

After the meeting, I started walking the 10 blocks back to my office. With eight more blocks to go, the bottoms of my socks were soaking wet.

With every step, my feet were sloshing around in cold, dirty water.

All my walking over the past month had worn out the soles of my shoes. I lifted my foot up and saw a big hole where there should’ve been leather.

I had no choice. It was impossible to find a taxi, so I kept on walking.

When I got to my office, my feet were beet red and very cold. I put my shoes and socks on the radiator to dry.

The next afternoon, I met with my father-in-law for lunch.

I had to cut our lunch short because I needed to buy a new pair of shoes.

“What brand of shoes are you buying?” he asked. I told him whatever fit me and was less than $75 a pair.

He narrowed his eyebrows, which was a sign that he was about to give me a life lesson...

My father-in-law had come from humble beginnings. He'd built a business from scratch into a huge ladies sportswear company. I always listened to his advice because it was full of life experience and was always spot on.

“Buy a good quality pair of shoes,” he said. Because in life “what’s cheap is expensive, and what’s expensive is cheap.”

Later, in the store, I was about to tell the salesman to show me shoes in my $75 price range, but I hesitated...

Instead, with my father-in-law's advice echoing in my head, I said, “Show me the best quality shoe you’ve got.”

When the salesman slipped the shoe on, the leather wrapped around my foot.

After walking around in the store for a few steps, the shoe was already broken in. They seemed to be made for me. I had to have them.

“Yep," the salesman said, "Allen Edmonds shoes are the best there is.” There was no need to box them — I wouldn't be taking them off.

I didn’t ask the price but winced when $229 rang up on the register.

And for the past 35 years, Allen Edmonds shoes have been the only brand of shoe I've worn. 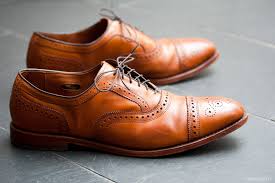 Over the years, I’ve sent the ones I've owned, even my first pair, back to the factory to be recrafted.

Recrafting is when the company rebuilds the shoe. They strip off the polish, replace the soles and heels, and put in a new cork inlay — all for a fraction of the cost of a new pair.

I had my original pair recrafted two times. Each time, they came back looking just as good as when I'd walked out of the store wearing them.

Each shoe has a serial number that lets the company know the date they were made. One day, I called customer service at Allen Edmonds to find out how long I’d owned my original pair. And I literally gasped when the rep said, “You’ve owned them for 20 years!”

Finally, after many years, I had to throw them out. Once the leather rips, there’s nothing the company can do to repair them.

After adding in my original cost of the shoes and the recrafting, my all-in cost was less than $22 year, which was a much better deal than buying cheap shoes each year for $75.

Now, you don’t have to tell me twice about paying up for quality. I’m a lifelong convert...

Paying up for quality is not an easy leap to make.

Warren Buffett, one of the greatest investors of all time, had the same problem. He couldn’t bring himself to pay more than what he thought something was worth.

Before he met Charlie Munger, Buffett was “cigar butt” investing. He called them cigar butt stocks because buying them would be like finding a used cigar on the street.

Buffett said, “Though the stub might be ugly and soggy, the puff would be free. “He went on to say, “Once that momentary pleasure was enjoyed, however, no more could be expected.”

Buffett would buy shares in companies that were fair businesses but would buy them at great prices. Once the stock moved higher, he would sell and look for another cigar butt.

One day, Munger told Buffett, “A great business at a fair price is superior to a fair business at a great price." Munger’s little twist turned Buffett into one of the richest men in the world.

Buffett went on to invest in a high-quality business that had enduring competitive advantages. It was hard at first, but he made the leap to paying fair, not great prices for those companies. Over the years, he bought large stakes in companies like Coca-Cola and American Express.

Instead of getting one puff and then selling the company, he'd hold onto it for decades. On his original investments, Buffett is up more than 13 times on Coca-Cola and 10 times on American Express.

Good Shoes, Great Businesses, and the Next Berkshire Hathaway

Explosive returns happen when you find a great business that's trading at a great price.

And I’ve found one that fits the bill perfectly.

It’s a Berkshire Hathaway clone but is headquartered in our neighbor to the north.

I’ve been following this company and its CEO for more than 10 years.

And in those 10 years, the company has performed brilliantly. But there's only been a handful of times when this business was selling for a great price.

Now is one of those times…

I’ve just put the finishing touches on an exhaustive research report about the company and its investment opportunity for you.

Keep an eye out for an email from me within the next few days regarding this unique opportunity.

Our timing couldn’t be any better…