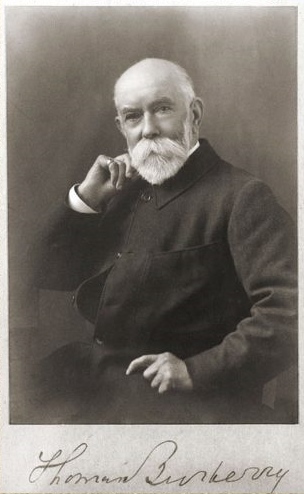 Thomas Burberry, 1835–1926, was a British outfitter who founded the company that bears his name. Today, Burberry is one of the world's premier fashion houses with assets exceeding $40 billion.

Burberry's breakthrough came in 1879 when he invented a fabric called gabardine.

Gabardine is a strong, tightly woven fabric that's waterproof but also breathable. It's an ideal material for coats and jackets in London's overcast and rainy climate.

In 1911, Burberry became the outfitter for Roald Amundsen, the first man to reach the South Pole. Burberry was also the outfitter for Ernest Shackleton, who led a 1914 expedition to cross Antarctica, and for George Mallory for his attempt to climb Mount Everest in 1924.

Burberry also dressed A.E. Clouston, who broke the record for a return flight from England to Cape Town, South Africa, in 1937. Burberry sponsored the flight and provided clothing. The DH.88 Comet used during the flight was subsequently named The Burberry: 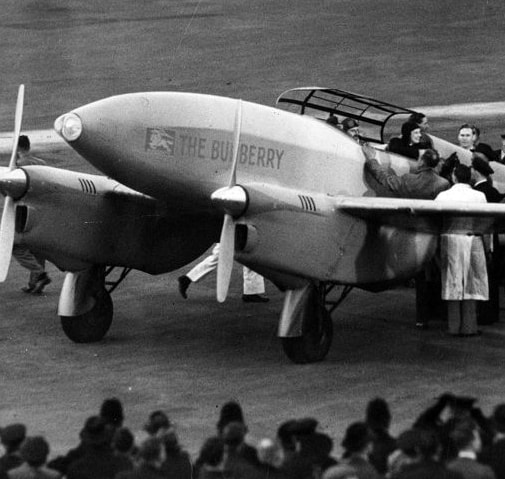 But Burberry might be best known for inventing the trench coat. The trench coat was originally an item of clothing for army officers. It was used in the trenches of World War I, hence the name.

Burberry has since become an iconic brand. And it's developed into one of the world's premier fashion houses. Shares currently trade mainly on the LSE under the symbol BRBY. But the company also has an American OTC listing under the symbol BURBY.

Brought to you by the experts at Wealth Daily,

Worried you're not getting the most out of your retirement plan?  Make sure with our free report, Retirement Reboot: 5 Quick Fixes for Your 401(k) Plan.

Today, Burberry clothes are ridiculously expensive. If you're planning to buy a Burberry trench coat, be prepared to pay between $2,000 and $3,000. Heck, if you want a key chain from Burberry, it'll cost you a few hundred bucks. Burberry wants $350 for this little duck key chain: 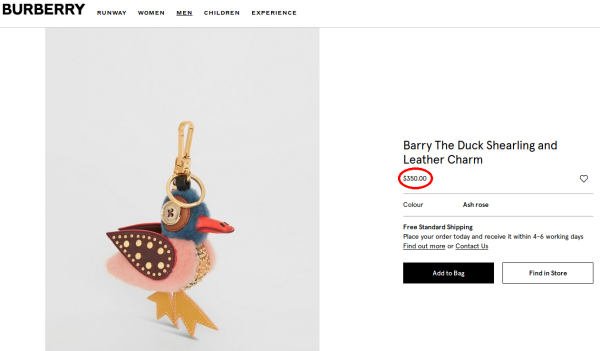 But despite all Burberry's success over the decades, the company is in deep trouble. And a lot of it has to do with recent social pressure.

You see, when Burberry has unsold inventory, it destroys it. Back in July, the BBC ran an article that detailed how Burberry burned some $37 million worth of unsold clothes, accessories, and perfume last year to protect its brand. This put heavy pressure on the company to stop the practice. And it left many people asking why the company couldn't just donate the unsold clothing.

But what can a luxury fashion designer do with unsold inventory?

If Burberry were to donate its clothes to the homeless, then homeless people would be walking around wearing designer clothing. This clearly isn't the image that the company wants to portray.

Clothing companies can also sell unsold inventory to discount places like Marshalls, TJ Maxx, and Ross. But this also threatens the exclusivity of the brand.

It's most likely that Burberry will end up selling its unsold inventory to discount stores like Marshalls. And this move could lead the company down a path of destruction.

Consider other high-end fashion designers. Back in the 1980s, Tommy Hilfiger was a major luxury brand. Today, you can buy a pair of Tommy jeans at TJ Maxx for $20. Calvin Klein, Ralph Lauren, Polo, and many others have all suffered similar fates. By making their clothing available to the masses, they've destroyed their brands.

Burberry has had its time in the limelight. But now that the company has been forced to dilute its brand, Burberry has put itself on a path of destruction.

Mark my words: In less than two years, you'll find Burberry clothing at discount stores like Marshalls and TJ Maxx. And that'll be the sign of the end for Burberry.

P.S. Burberry's clothes are way overpriced right now, anyway. If you want a coat or jacket of similar quality that costs one-tenth the price, check out Barbour.