Tenbaggers in the Silicon Wadi

“Success in creating AI could be the biggest event in the history of our civilization.” — Stephen Hawking

Bill Gates has called it “the holy grail" of computing science: “If you invent a breakthrough in artificial intelligence... that is worth 10 Microsofts.”

Andrew Ng, a former chief scientist at Baidu, says: “Just as 100 years ago electricity transformed industry after industry," AI will do the same.

By 2021, it will increase global business revenues by $1.1 trillion.

The total economic impact could skyrocket over $15 trillion over the next 12 years. 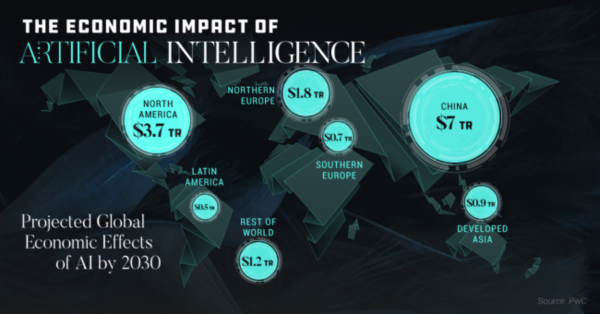 Investment bank Morgan Stanley thinks the AI industry will grow from its current size of $350 billion to a whopping $1.1 trillion by 2040.

And with the stakes measured in trillions of dollars...

AI Is Changing the World

Artificial intelligence is already a big part of our daily lives, but it will also have a huge influence on the entire world. And China is leading the way.

Even two U.S. tech giants are battling it out.

In April, Apple stole Google’s head of AI: John Giannandrea. He’s been Google’s chief of AI since 2010. With this new machine-learning expert, Apple is sure to be a contender in the AI arms race.

Since 2012, both companies have been locked in an AI acquisition arms race.

Google’s in the lead with 14 buyouts, but Apple isn’t conceding. It's amassed a $267 billion cash hoard and will spend every dime of it to win.

They’re not alone, either. Every major company in Silicon Valley is stockpiling cash for what could be the “Mother of all Bidding Wars.”

A whopping $347 billion is sitting on the books at Google, Facebook, Microsoft, Cisco, and Oracle. And much of it is earmarked for AI.

In 2017, companies globally completed around $21.3 billion in mergers and acquisitions related to AI and machine learning. That’s around 26 times more than in 2015.

Amazon, Facebook, and IBM all participated in the acquisition frenzy.

And yes, some of the targets were in the Bay Area or New York. But the real epicenter of the AI revolution isn’t in America at all. It’s over 5,600 miles away. Both companies are building their AI teams, and both are fighting over the most talented people...

The Juiciest Buyout Targets Are Hidden in the Silicon Wadi

What do the following have in common: the cell phone, voice mail, USB flash drive, the first Intel PC processor, and Google’s suggested search function?

They were all invented in Israel.

Israel is quietly one of the most important tech hubs on Earth.

It has about 4,000 technology startups. And it raises venture capital at two-and-a-half times the rate of the U.S. and 30 times of Europe per capita.

And a staggering $1.1 billion of that went to artificial intelligence.

Globally, $6 billion of venture capital flowed into AI last year. That means one in every six AI investor dollars winds up in places like Tel Aviv.

Right now, there are more than 430 AI startups in Israel.

Google, Facebook, Microsoft, Intel, and almost every international technology company have a research and development (R & D) office in Israel.

They’re recruiting software engineers as fast as they can. Unfortunately, the best talent is locked up in the founding teams of major AI startups.

You can’t hire them away. Your only choice is to buy them out. And that's why we’ve seen a wave of high-profile acquisitions over the last few years.

Waze, based out of Ra'anana, Israel, sold for $1 billion to Google. Mobileye, an Israeli AI and sensor technology company, sold to Intel for a whopping $15.3 billion.

And I'm expecting the next wave of takeouts to be even bigger!

Getting in on the right target stocks early could earn you a fortune.

This Is the Ultimate Insider’s Game

Most of these companies are tiny and have market caps under $100 million. Some of them are still preparing for their initial price offerings (IPOs). None of them are covered by American analysts.

If you want to get in, you'll need an inside man.

Once again, that’s where I come in.

I’ve been doing business in Israel for years. In fact, I’m here now to meet with CEOs and venture capitalists to get the inside scoop.

Within the coming weeks, I’ll have more details for you on the companies that tackle problems like big data, machine vision, health, fintech, and security.

Each of them has the potential to be a multibillion-dollar stock.

And all of them will be on the buyout radars of titans like Google and Amazon.