The 1 Thing That Makes Stocks Recession-Proof...

The stock market had been in the beginning stages of the worst bear market since the Great Depression.

And the producer of the Closing Bell on CNBC needed a guest.

She wanted to have me on the show to talk about technology bargains in the face of the down market.

At the time, the stock market was only down by 13% from its recent all-time high. But it would later fall by more than 50% over the next year.

I spent an hour preparing my picks for the interview. And three companies jumped off the page at me.

I emailed my picks to the producer.

A few hours later, I boarded the train and headed out to the New York Stock Exchange (NYSE).

During the interview, I told Maria Bartiromo that I liked three tech companies. They all had rock-solid balance sheets and were trading for bargain prices. These were the ones that would survive any crash. 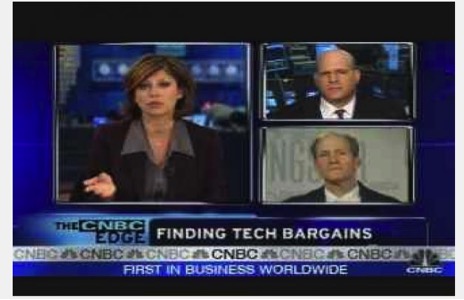 The balance sheet, which many investors don't focus on, is the one thing I pay the closest attention to.

In times of economic upheaval or recessions, it's the companies with the strongest balance sheets that survive.

A strong balance sheet is like oxygen: You don't think about it until you need it.

The three stocks that I recommended were Oracle (ORCL), Microsoft (MSFT), and Salesforce (CRM).

Over the next year, the stock market would fall by more than 50%. These stocks fell, too. But I hadn't cared...

How they'd perform over the next month or quarter was anybody's guess.

But over the long term, they looked like money in the bank.

You see, smart investors don't sell in the down market: they buy. The smart investor doesn't panic. And they don't trade on their emotions...

While weaker companies had been going out of business or merging, these companies soared. 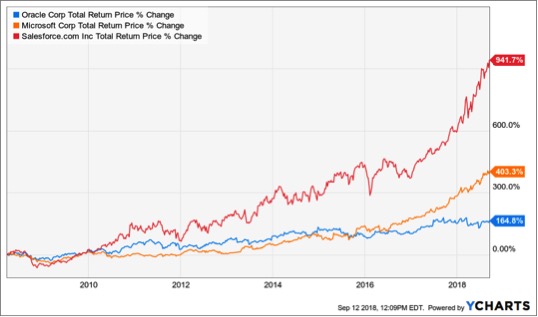 I hadn't had a crystal ball. I picked these three companies because they'd been trading at huge discounts to the worth of their businesses.

While the rest of Wall Street was taking cover under their desks, I was confident that these companies would not only survive but also thrive.

Wall Street was worried about the next quarter's earnings. I was looking much further ahead...

These three companies, Oracle, Microsoft, and Salesforce, all had businesses that generated huge amounts of cash.

They all had customers that were "sticky." Once these companies acquired a customer, they would stay for long periods of time.

If there were a shakeout in the technology industry, these companies would be the ones that stood to gain.

You see, I have a pretty simple checklist that I use before I invest in any company:

If the company doesn't have a strong balance sheet, I don't go any further. What good is investing in a company, even if it shows great promise, if it might go out of business tomorrow?

I don't want to invest in a company that relies on the good graces of the capital markets to stay in business.

Later this month, I'm going to be interviewed by Brian Hicks — the founder and president of Angel Publishing.

I told Brian that he could ask me anything. And from what I hear around the office, he wants me to share the "keys to the kingdom."

He even got me to agree to share a stock pick with you.

Brian asked for a company that will play a leading role in a multibillion-dollar industry...

The kind of stock that he calls a "retirement-maker."

Like with all my interviews, I'm getting everything ready and have already nailed down one stock to buy now.

Once we have all the information, I'll make sure you're the first to know. This is something you definitely won't want to miss. More to come...

In Case You Missed It

And you’ll find this path to guaranteed income, along with 26 other retirement-padding secrets, in Jimmy Mengel’s The Big Black Book of Income.

After conducting exhaustive research, Jimmy has uncovered some of the best-kept investment secrets that could double or even triple your retirement savings. If you’re interested in receiving payouts of thousands of dollars in your mailbox every month…