I hugged him so tightly that I thought I was going to break his ribs...

I never used to be an early riser. But all of that changed when I read an article on time management...

“If you want to add more productivity to your day,” the article said, “get up an hour earlier.”

It sounded simple and easy enough. So, I tried it...

The one hour made all the difference. I now had more time in my day. So, I started to move my wake-up time even earlier...

For the past 10 years, I've found that 5:45 a.m. is the right time for me. With those extra hours each day, I was able to write a book on investing and am able to read a book a week.

After waking up, I spend those extra hours at home. Everyone else is still sleeping, but I have an oasis in time...

Early to Rise Makes You Healthy, Wealthy, and Wise

I shared my early wake-up schedule with a buddy. He smiled and invited me to his “breakfast club.” He gave me the address and told me to be there no later 6:50 a.m.

The group is a pretty diverse. And a few are successful business owners, entrepreneurs, and high-level corporate types.

Over coffee, Danishes, and bagels, they would shoot the breeze about everything and anything.

I got there five minutes early on my first day. It was a room in a building that they rented just for their meetings.

This group wasn’t afraid to spend money. They had a barista making coffee and two waiters putting out food and clearing plates.

I knew most of the guys — our paths had crossed over the years. They were a smart, sharp group of businessmen. And each of them was very well connected in the business world.

There was no schedule — you didn’t have to talk or share anything. The rules were simple: if you needed advice, had an idea, or needed help, you'd speak up. If not, you'd listen and offer help whenever you could...

A Made Man of a Different Sort

I’m grateful that I was made a “member” of this group.

I’ve made great connections, learned a lot, and made close friends — all before most people get out of bed every morning.

When I travel, I make sure to email one of the guys — I want to know what I missed.

Two weeks ago, “Johnny” dropped a bombshell on us.

He started the conversation by saying, “I wasn’t feeling well for the past month. I had a slight cold. My doctor told me to go for a blood test. I knew something was wrong when he told me to come to the office to talk.”

I put down my coffee cup down — this wasn’t going to be good.

“It’s stage four liver cancer. They are going to operate next week, and then we’ll have a plan to move forward.”

The room went silent — the only sound was the humming of the clock on the wall.

Johnny had built a huge business. He built and ran the largest company in his industry. He was quite impressive, and he was also a very generous person.

Each year, his company donated millions of dollars to a whole slew of charities. Johnny encouraged his people to work hard, so they could help more.

After the news sunk in, we all started to offer our connections — one of the guys sat on the board of a major hospital in NYC. The advice was coming as fast as water from a fire hydrant...

Johnny thanked us all but said he had it covered. His family already was in contact with the top cancer people in the field.

At 7:30 a.m., our meeting ended. Instead of running out, we all went over to Johnny.

When it was my turn, I hugged him so tightly that I thought I was going to break his ribs. He hugged back, and I felt his breath on my neck.

I whispered in his ear: “That bastard isn’t going to win... You got this.” When I finally let him out of the hug, he smiled.

The rest of my day, I'd walked around in a fog.

I knew the hell that was waiting for him. It would start with cutting, then poison, and maybe burning. That was the protocol: surgery, chemotherapy, and radiation.

Yes, over the past decade, we’ve been pushing back again cancer with more precise surgeries and better chemo drugs, but not much has changed with how we approach it. We still try to cut it out, poison it, and burn it.

Because of my personal experience with the deadly disease (my mother has fought it twice), I've dedicated much of my time to and resources on researching a solution.

It’s taken many years, but I think we're finally nearing the point of curing cancer.

That’s why I went to Israel to meet with one of the world’s leading pioneers against cancer.

His name is Dr. Zelig Eshhar, a professor of immunology at the Weizmann Institute of Science.

Dr. Eshhar invented a technology that is so revolutionary that FDA commissioner Scott Gottlieb says, “We’re entering a new frontier in medical innovation.”

In lab testing to date, a stunning 94% of those suffering from an acute form of leukemia went into full remission from receiving this treatment, and that was after all other treatments had failed!

When I found out he was in Israel, I made an appointment to see him...

Interview With a Genius

I spent three hours with the professor. He had the patience of a saint and took all the time in the world to make sure that I understood the approach.

To make sure I got it, he made me draw it on a whiteboard. When I was done, I asked him, “Did I explain correctly?"

With a smile, the professor said, “It was just satisfactory.”

And then he told me to turn the camera on him. I have the video right here, right now.

It’s something you must watch.

You could be watching the cure for cancer before your very eyes: 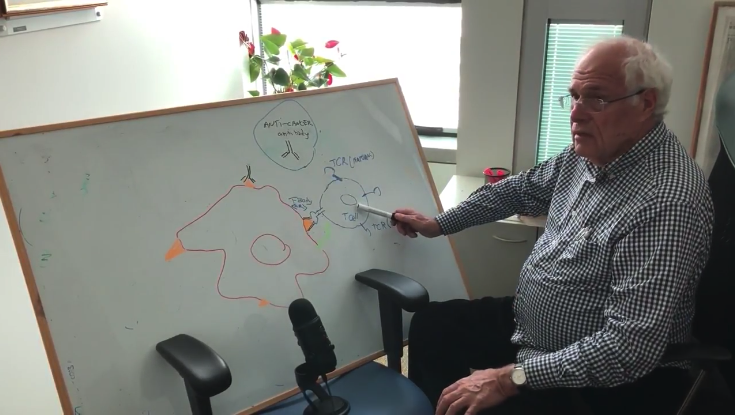 What’s the Cure for Cancer Worth?

Today, you can get a copy of my exclusive research report on Dr. Eshhar’s breakthrough cancer-killing therapy and the company that’s pioneering it.

The company’s stock has been one of the best-performing medical treatment companies on the market — with a stellar return of 349% in just two years.

But the run has just begun... After all, what’s the cure for cancer worth?

Priceless, in my opinion.

This company has the potential to the become one of the biggest healthcare stocks ever.

And I want you to be a part of this history-making company.