The Death of Fake News

He was the most powerful publisher of his day...

At the time, the newspaper was competing with 16 other major dailies.

Hearst hired the best manager and writers and paid them very well. In no time at all, his newspaper was winning the circulation wars.

The Journal’s chief rival was the New York World, published by Joseph Pulitzer.

Hearst and Pulitzer were going head to head to sell newspapers.

They both also started to play fast and loose with the facts. The more outrageous the story, the more newspapers they sold.

Their newspapers were filled with rumors, propaganda, and sensationalism. And sales soared.

In January 1898, the USS Maine was sent to Havana to protect U.S. interests during the Cuban War of Independence.

A few weeks later, the USS Maine was anchored in the Havana Harbor when there was an explosion on board. Most of the crew had been sleeping. In total, 260 men lost their lives, and the ship sank to the bottom of the harbor.

Both newspapers gave intense coverage to the USS Maine. They exaggerated and distorted information. They then started to “invent” news and wrote about Spanish atrocities in Cuba. 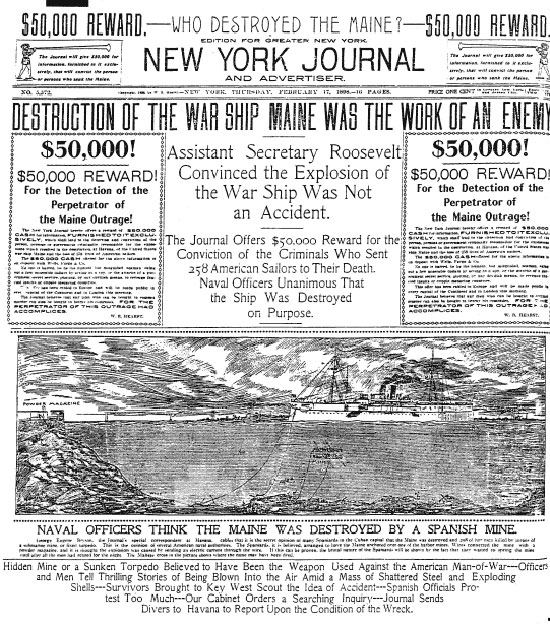 The public whipped itself into a frenzy: "Remember the Maine! To hell with Spain!"

Two months later, on April 21st, the U.S. declared war on Spain. That kind of “reporting” would go on to earn the name "yellow journalism." To this day, no one has ever established exactly what caused the explosion aboard the USS Maine and who was actually responsible.

Today, we have a different name for yellow journalism: fake news...

The End of an Era

Fake news has taken on a life of its own. It’s written content that’s published online and in print with the intention of misleading the public.

It exists to not only get more views, clicks, and have the story go viral but also for something more important: to damage a particular person or organization.

And this is very dangerous and harmful.

Only a few days ago, a deranged 19-year-old named Nikolas Cruz took an Uber to his former high school. He also had an AR-15 rifle. Cruz got out of the car and started shooting. He killed 17 people.

The police took him into custody and released his name to the media shortly afterward.

Almost immediately, there were tweets about Cruz being an undocumented Deferred Action for Childhood Arrivals (DACA) recipient, commonly known as a Dreamer. DACA recipients are children brought to the U.S. by undocumented immigrant parents.

Social media claimed that Cruz was a Dreamer.

But other than his last name being “Cruz,” there was no evidence that he was a Dreamer.

And that wasn’t the only fake news gaining traction. A photo of the suspect started to gain traction online, too.

Cruz wasn’t a Dreamer, and that wasn’t his photo. Fake news was at work.

Fake news misleads and destroys. If “facts” are passing as true when they're actually false, we're all in trouble. It doesn’t matter what side of the aisle you’re on — Democrat or Republican.

Developers are using AI to help in identifying suspect stories and in alerting the necessary authorities to fake news. They're trying to cut off fake news before you can read it and before it gains traction...

Could This Algorithm Solve It All?

The algorithm is called AdVerif.ai, which is run by a startup with the same name.

It works to detect fake stories, malware, nudity, and other questionable content. And it scans content to look for any obvious signs of false information.

The program checks whether or not there are too many capital letters in a title and then cross-checks the content with an existing database for fake and real news stories.

This algorithm will be beneficial for businesses because it will call out fake claims about their products. It will also make sure that the content we read will be true.

AdVerif.ai launched a beta version of its algorithm in November 2017. Right now, the software works with advertising networks and content platforms all throughout Europe and the U.S.

This will be a constant battle — one that will be left to AI to help us in getting information and news that's true.

If you don’t have exposure to AI in your portfolio, now is the time to get some.

AI is a mega-trend that will change how we live and act.

It will also generate more than $15 trillion over the next dozen years.

One way to invest is to buy an ETF like Global X Robotics & Artificial Intelligence Thematic ETF (BOTZ).

BOTZ holds a portfolio of around 30 companies that have exposure to robotics and AI. Last year, the fund was up more than 66%.