Investors today have the patience of a housefly.

There was a time when investors bought and held stocks for decades. They developed a personal connection with the company, read its annual reports, voted for board members, and stayed loyal to its future... because the company’s success was directly tied to their own.

Those who did that usually had excellent returns to show for it.

Back when I was in fifth grade, one career day stands out in mind. You know those days, when a parent of one of the students would come to school and talk about their job.

That day, a friend’s dad spoke to our class about the stock market — even though he was a noted physician!

Truth is, he had absolutely nothing to do with finance... yet to this day I’ll never forget the invaluable info he told us.

He started off with the importance of saving our money and then using it to invest in stocks.

“The most important thing,” he said, “is to have your babies (which were stocks), and then to keep collecting more.”

Then we learned how his father bought IBM for him when he graduated medical school, with only one rule attached to the gift — never sell a single share!

And I know why, too.

More than 20 years later, the yearly dividends alone were higher than the price his dad bought the shares for!

He warned us that our generation should learn from his: treat stocks like pieces of a company...

Hold them, learn about them, and eventually you will be rewarded.

Lessons for the Future

While I can honestly say I don’t know anyone who has held shares of the same company for half a century, I do know several people who have been invested in the same stock for 25 years.

Of course, financial information was scarce back then for individual investors like us. If you wanted to find out how your stock did that day, you would need to wait for the morning paper to find out.

And don’t get me wrong; I’m not advocating holding stocks for decades. I’m simply telling you that most investors need to S-L-O-W D-O-W-N.

Investors push the panic button far too many times during a market downturn — even if it’s from a one-time event!

As you can probably guess, this doesn’t exactly work out well for them, because absolutely nothing has changed about the company fundamentally.

Point is, never sell out of panic and fear.

A Trading Lesson from Copa Airlines

Now let me show you an example of how this advice can pay off for you...

Copa Airlines (NYSE: CPA) is one of the holdings for my readers and me in Charles Mizrahi's Insider Alert newsletter. We added the stock to the portfolio on November 3, 2014, when it was trading at $107 per share.

This company is one of the leading airlines and is based in Panama, which gives it a competitive advantage by providing flights to Central and South America.

The stock has been on a roller-coaster ride since then, shooting higher just after we bought in, then plunging to $40 last September after the Venezuelan government refused to pay the company for flights paid for by passengers in Venezuela.

We saw this problem as temporary, and despite the amount involved, felt it wouldn’t prove terminal for the company.

The investment herd, however, did what it always does: overreact to the news and make a beeline for the exit. Of course, in doing so they also lost two-thirds of their initial investment.

For our part, we continued to pore over the numbers, each time reaching the same conclusion that the market had grossly oversold shares of Copa Airlines.

We didn’t recommend selling a single share. In fact, I constantly reiterated our steadfast position in the stock to new readers, and we continued to build the position.

And we were right on the money: 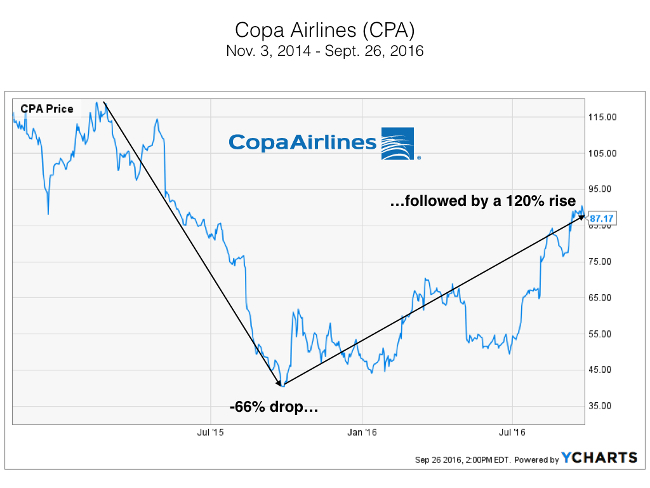 Now, even though the stock is still off 19% from where we recommended it, it’s a stock we intend to hold for at least another two months.

Look, if you take nothing else away from today’s story, it’s that the market isn’t there to guide you... it’s there to be taken advantage of!

This is only one example of how our unique investment strategy pays off time and again.

It’s the reason I was named the #1 market timer in the U.S. for seven years. It’s also the reason Barron’s named me the #1 commodities futures manager after producing a 313% three-year return.

More importantly, it’s the reason my readers have banked a solid gain on 75% of the stocks we’ve traded together.

Now it’s your turn to experience the same kind of success, but I can only show you the door...

Taking that first step is up to you.