The Power of Industry Player Insight

Bob is the CEO of a chain of major department stores around New York City.

People shop there for the thrill of hunting for bargains. The stores don't advertise much but do have a loyal customer base.

Between the appetizer and the entrée, I asked him, "Bob, who's your No. 1 competitor? The one you'd want to see out of business?"

Without a moment's pause, Bob replied, "The TJX Companies — hands down. When our team goes to buy closeout merchandise, we're always competing with it. Those guys are sharp."

That was all I'd needed to know to start my own research. I turned to my wife and asked about the off-price retailer. She confirmed what Bob had said. The TJX Companies (TJX) has amazing bargains on brand-name items every day of the week.

I even went shopping with her at TJ Maxx. I couldn't believe how long the lines were at the cash registers. And this was right after the worst financial crisis in history!

America was still reeling from the 2008 financial recession. But instead of tightening their wallets, shoppers were still spending money at TJX!

I wasn't concerned about Amazon being a threat to TJX.

An online marketplace can't replicate the thrill of the bargain hunt.

In fact, the company was growing in the face of Amazon.

I spent a few weeks digesting all my research. And then I told my readers to buy TJX in August 2010 for a little less than $18 a share: 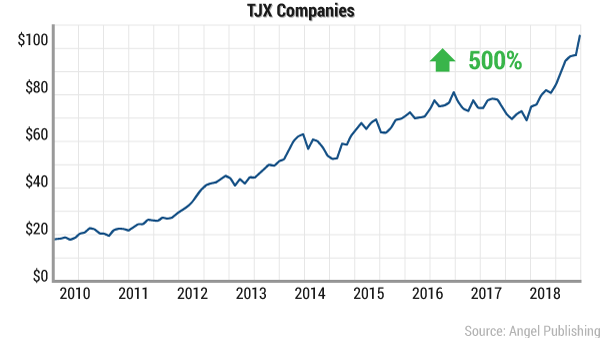 The stock is still in my open portfolio. It now trades for more than $100 a share, so we're sitting on gains of more than 500%.

This is why I always try to speak to the players in the industry. And it's because they're the ones on the front lines. You can't get the info they have from reading annual reports.

And it's not because they're smarter than you or me.

They're just more in tune with what's happening in the industry. They have their ears to the ground.

Getting Intel Straight From the Source

For instance, imagine that you own a bakery...

If the price of wheat increases, you'll know about it before everyone else does. You'll see it first with a higher flour price. And it's because that's your business.

So, by the time you hear about it from some talking head on CNBC, it's already too late.

I don't just trust what I read in a report like most "analysts" do. Instead, I'll place a few phone calls and get to the source. I want to hear it straight from the horse's mouth.

And I heard it directly from Bob. As the CEO of a major department store chain, he told me what's really happening in the industry. That's the kind of intel I use when I'm about to make an investment.

That's information you can't get from some "analyst" who works at a bank. They see things before everyone else does. It's priceless information. That's the major difference between those who make fortunes and those who muddle along.

Because by the time the story gets out, it's already too late.

The so-called "analysts" on Wall Street miss the real story most of the time.

They usually see where the puck has been — not where it's going.

TJX is only one example of a great trade. And that only happens when you buy a solid business at the right price.

P.S. Last Thursday, I hosted a summit where I talked about my investment strategy.

I shared with the attendees the one stock that they should buy now. If you missed it, here's the link to the recording and the link to the written transcript. Trust me, you'll thank me later when you see extra zeros at the end of your net worth.