Only 3% of the world’s water is fresh water. And two-thirds of that is inaccessible for our use...

On October 17, 2001, Israeli Tourism Minister Rehavam “Gandi” Ze’evi and his wife were staying at the Hyatt Hotel in Jerusalem.

Ze’evi had decided to head back to his room by himself. He'd taken the elevator to the eighth floor.

He'd stepped out of the elevator and had begun to walk down the hall when...

Someone shouted “Hey!” and Ze’evi turned.

Two hit Ze’evi in the head. The first shot had been fatal — the bullet had penetrated his brain.

Ze’evi was the first Israeli minister to be assassinated.

Bodyguards are now assigned to every Israeli minister...

Guards at the Door

Last week, Uri Ariel, a good friend of mine, was in New York on official business.

Ariel is Israel’s minister of agriculture.

We hadn't seen each other in more than a decade.

He'd called to let me know that he was in town and wanted to meet.

I arrived at his hotel room promptly at 10 a.m. and knocked on the door.

His bodyguard opened the door and was about to frisk me... 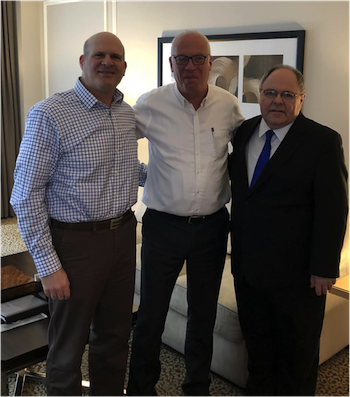 But then Uri walked to the door and smiled. “Shalom, Chaver — it’s been too long.”1

The bodyguard stepped aside, and Uri hugged me so tightly that I could barely breathe.

After about 20 minutes of coffee and catching up, the smile left his face.

He'd had meetings with the governors of each state. The meetings had all gone very well.

His goal had been to promote agricultural trade with those states. But more importantly, he'd wanted to introduce them to innovative Israeli agricultural technology...

Many investors know about the Silicon Wadi — Israel’s version of Silicon Valley.

Google, Facebook, Microsoft, and almost every international technology company has a research and development (R&D) office there. And Israeli software engineers are some of the best in the world.

Uri wanted my input on how to get the word out about another type of technology: agricultural technology.

“Israel is an agricultural superpower," he said, "we are able to feed the world.”

He started to tell me how Israeli cows yield the highest milk in the world — more than 12,000 liters per year. That's a 20% increase over milk produced by cows in the U.S.

Experts come from all over the world to learn from Israel’s success.

And there's a company in Israel called Water Gen that can produce clean drinking water from the air!2

More than 1 billion people worldwide lack access to clean water. This technology could save millions...

Uri then told me the purpose of our meeting. He'd known that I have a large following of intelligent investors.

And he wanted to introduce me to Israel’s agricultural technology, so I could share it with my readers.

In July, I’m going to be in Israel to tour a desalination plant.

He also wants to show me how Israeli technology can even grow crops in deserts. “Don’t worry, I’ll keep you busy 24 hours a day, showing you all that we have to offer,” he said with a smile.

As our meeting was coming to end, he turned very serious again: “But the bigger picture... is to share this technology with our Arab neighbors... with the goal of it leading to peace”...

When I left our meeting, my head was spinning. The opportunities were enormous on so many levels.

Over the next few months, I’ll share with you different innovations from Israeli startups. These companies are on the cutting edge. And I’m willing to bet that the next Waze — sold for $1 billion to Google — or Mobileye —sold to Intel for $15 billion — can be found there.

Here's a list of the 50 most promising Israeli startups.

I didn’t do any research on them. I just want to show you what's out there.

I’m excited to learn more and share this information with you.

Over the next few months, expect to receive videos and updates on technologies that could change the world… and potentially make you a fortune.

2 Click on this link to watch a video on how it's done.