What comes to mind when you picture a robot? Is it a big blocky gray thing with whirring joints and claws? A light-up face with buttons? It probably looks like a windup toy.

Maybe the Terminator comes to mind or that disk-headed robot from Lost in Space. Or maybe it's C-3PO.

It doesn't matter how you picture a robot. They all have one thing in common: They're made of cold, hard metal.

But those might not be the robots of the future. In fact, NASA's space robots have more in common with a pencil grip than with the Iron Giant.

The future of space robots will be soft. Let me explain what that means...

Rebecca Kramer-Bottiglio is an assistant professor at Yale University. She runs a robotics research lab in the belly of the school. She and her student researchers have created designs that could completely retool how we see artificial intelligence (AI).

Kramer-Bottiglio and her team have created what she calls "robotic skins." These "skins" can turn everyday objects into robots. 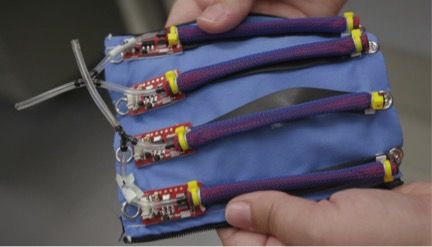 The skins look like a thin layer of mesh. They can fit over almost any surface or item. The mesh is actually a series of tiny sensor and motor that can be programmed to animate any movable object.

In Yale's lab, the researchers first applied the skins to what they call "deformable objects," which means foam tubes and stuffed animals. With the skins on, the foam tubes were to crawl like inchworms. The teddy bears stumbled around like toddlers.

And with the skin, these everyday objects are able to complete simple tasks. They can pick up or wrap themselves around small objects...

Soft Robots Blast Off to Space

Traditional robots are built with a single function in mind. But with Yale's soft robots, they can complete any number of tasks on the fly. They're prepared for situations nobody even considered when they were designed.

And it's that flexibility of the robot skins that caught the eye of NASA. Astronauts are constantly improvising. If a robot can also improvise, there could be countless benefits.

Yale could create a soft, cushy Mars rover that would be able to handle even the roughest terrain.

There's even talk of using the robot skin to make clothes. Are you a constant sloucher? This shirt would automatically correct your posture.

The potential with these soft robots is endless. That's why the Yale research lab received a $2 million grant from the National Science Foundation's (NSF's) Emerging Frontiers in Research and Innovation (EFRI) program.

The future looks bright for these soft robots. There are plans for mass production or even 3D printing their components.

P.S. As you know, at Park Avenue Digest, we're excited for the future of AI. And last Thursday, the founder of Park Avenue Digest, Charles Mizrahi, hosted the first Insider Fortunes Summit. Charles talked about his investment strategies and his current favorite stocks.

If you missed the summit last Thursday, that's fine. It was a big news day. And a lot of us were wrapped up in other things.

I can't stress enough the importance of you giving the presentation a watch. When it comes to your financial future, the information inside is priceless.