The Tech Hub of the East

This country is only a little bigger than New Jersey, the fifth smallest state in the U.S.

It’s also located in a bad neighborhood. It’s surrounded by countries that, for the past 70 years, have gone to war against it and continue to call for its destruction.

And yet, Israel continues to thrive.

And it has more scientists than any other place in the world!

Israel also has more startups than anywhere else in the world, including the U.S.

Forbes calls it “a paradise of tech innovation...”

And the Economist says it’s “a high-tech superpower..."

It’s the destination of more venture capital than anywhere else on the planet.

When Warren Buffett’s Berkshire Hathaway made its first international investment, the company it bought was an Israel-based company: ISCAR.

Boots on the Ground

Mobileye, which develops a vision-based advanced driver-assistance system, was founded in Jerusalem in 1999. It was recently bought by Intel for $15.3 billion...

In 2006, FreeMap Israel was a project founded and developed by an Israeli programmer. A few years later, the company changed its name to Waze. The company continued to focus on its GPS navigation app. And in 2013, Google snapped up Waze for $1.3 billion.

Blue-chip tech companies, such as Apple, Facebook, Google, and Amazon, all have research hubs in Israel.

Many high-tech companies are located around Tel Aviv, Israel. It’s been nicknamed the “Silicon Wadi,” after California's Silicon Valley.

I’d spent the last several months speaking with CEOs and venture capitalists as I set up this trip.

I'd asked them to identify companies that have a high likelihood of becoming the next Waze or Mobileye.

I'd also rented an apartment close to Tel Aviv. I can see the skyline from my balcony.

For the next three weeks, I’ll be traveling within the Silicon Wadi.

I have meetings set up with innovation leaders. And several of the companies that I'll be meeting with are already disrupting their industries.

But I’m not the only one with boots on the ground. I’ve already met businesspeople from China, Russia, and Japan who are looking to acquire or partner with Israeli companies.

And one of my business meetings with a biotech company was even canceled. I received a text a few hours after I landed. In it, the CEO told me our meeting was off because management had just agreed to be acquired by a European global pharmaceutical company.

The Meetings to Come

The pace here is quick and ruthless.

Last week, Microsoft leased an entire WeWork location in Tel Aviv. Smaller tenants and startups were told to move out over the next few weeks.

Microsoft is in the middle of constructing a brand-new corporate campus for thousands of employees in the Tel Aviv suburb of Herzliya.

Over the next few weeks, I'll be meeting with several companies.

A few of them are public companies. You could buy their shares on the Nasdaq.

Others are private. I want to follow them carefully because, over the next year or two, they're sure to become powerhouses.

Nothing Is Lost in Translation

When Charlie Munger, Warren Buffett’s partner, wanted to invest in China, he gave $50 million to Li Lu. Lu is a Chinese-born American investor.

Lu has turned Munger’s $50 million into $500 million over the past few years.

Munger said if you invest in China, nothing's better than using the guidance of someone who speaks the language. This way, nothing gets lost in translation.

It was Lu who introduced Buffett and Munger to an unknown Chinese car- and battery-maker: BYD. Berkshire invested $230 million at about $1 per share. Currently, the stock is trading for $6 — a 500% gain.

I speak Hebrew fluently. And I totally see the advantage that Munger refers to.

Deals and opportunities “suddenly” appear when CEOs know they're dealing with someone who understands them...

A Company on My Radar

One company that I want to learn more about while I’m here is the Israeli defense company Elbit Systems Ltd. (ESLT), which is located in Haifa: 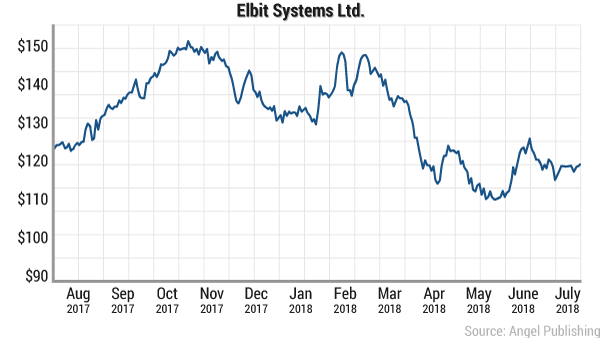 The company has a strong competitive advantage in defense electronics systems.

Elbit is listed on the Nasdaq and currently trades for around $120 per share.

I still have much more research to do on it. But my back-of-the-envelope valuation tells me this stock should be trading much higher.

Israel is truly the tech hub of the East. And I look forward to learning more about the different opportunities in the Silicon Wadi over the next few weeks and sending my intel your way.

During that time, be sure to keep an eye on your email.

I’ll be sending you updates and reports on these innovative companies as I meet with them...