The Technology Every Future Company Will Need

“Television won’t be able to hold on to any market it captures after the first six months.” — Former 20th Century Fox CEO, Darryl F. Zanuck, 1946

Change scares the crap out of people...

When a new innovation or technology is introduced, most people’s reaction is fear.

We can’t help it; it’s something in the way we humans are hardwired.

In 1458, the first commercial printing press went into operation.

Before the printing press, scribes would write one document at a time. Information was limited, and ideas took a long time to spread.

But with the printing press, printing books would open up knowledge to so many within a very short time.

But the printing press was a new innovation, and it didn’t catch on right away...

Johannes Trithemius, one of the leaders of the German renaissance in the late 1490s, wasn’t impressed: “Printed books will never be the equivalent of handwritten codices.”

He said this because "scribes display more diligence and industry than printers.”

For thousands of years, information had been exchanged long distance through drumbeats and smoke signals.

The invention of the telegraph in the early 1800s was revolutionary. Information could now be sent between villages, towns, and cities within a matter of seconds.

But it, too, faced a wall of worry.

In 1889, a leading magazine said the telegraph was “a constant diffusion of statements in snippets...”

Charlie Chaplin hadn't thought that movies had a future.

Even though he was two years into his movie career, he called them “a fad” and “canned drama.”

Chaplin thought that he knew what people wanted: “What audiences really want to see is flesh and blood on the stage.” In other words: live plays...

Juma wrote that most people don’t really fear technology. Instead, they fear the loss that can be brought on by change.1

Farmers originally resisted mechanical farm equipment because the physical labor of farming was part of their identity, way of life, and economic security. And they hadn't wanted a new innovation to change that.

Right now, one of the biggest innovations changing everything around us is artificial intelligence (AI).

And people are scared...

The fear of this groundbreaking technology is based more on gut than on evidence.

The fear is that AI will take jobs, run the world, and displace humans. 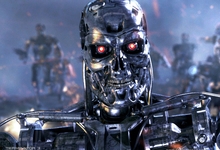 However, that’s not even close to what is happening and will happen...

Instead of taking jobs, AI and robots are projected to increase employment.

In fact, AI will create more jobs than it will eliminate.2

It won't be humans versus machines but instead humans and machines.

The economic impact that it will have will be huge over the next decade.

In terms of making money, AI is in the very early innings.

An easy way to play this mega-trend is by investing in an ETF.

And the ROBO Global Robotics & Automation ETF (NASDAQ: ROBO) is a good way to ride this wave.

But in the Park Avenue Investment Club portfolio, our stock selection for riding the AI wave is a producer of the chips that are making AI work.

But here’s the deal: Even though this company is solid and mature — it’s been public for nearly three decades — it’s about to go on a dramatic run. And I mean dramatic.

Think about Apple, as an example...

Apple has been publicly trading since the 1980s. But the stock took off like a bandit when it launched its iPods, iPads, and iPhones. In fact, the stock is up over 1,000% since 2009 and is about to become the first company to have a $1 trillion market cap.

That’s why I’m recommending this AI chipmaker for immediate purchase: The growth that it'll experience over the next 10 years could rival that of Apple's.

1 Professor Juma’s book Innovation and Its Enemies: Why People Resist New Technologies offers amazing insights into and history on why we oppose change.

2 AI will make life easier and create more jobs. Check out this study from Gartner.