When Bad News Is Good News

I hate this picture.

It’s the one that appears on every financial news site — both digital and print.

It's usually right underneath headlines like “Stock Market Plummets” or “Markets Set for Worst Week in 2 Years.”

Or some other stupid headline designed to frighten the crap out of you.

The picture I hate is the one of a “trader.”

He’s either holding his head in his hands or is staring up at a computer screen, looking like his puppy was just run over by a truck: 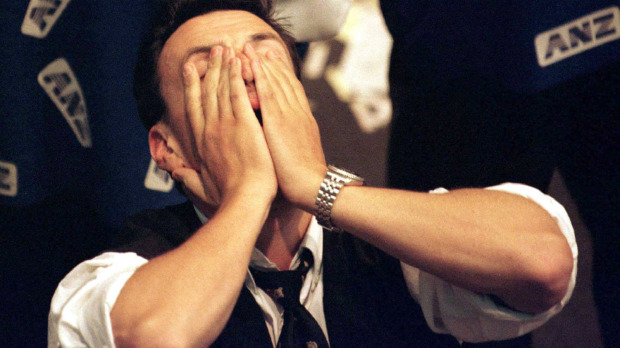 Sometimes, for an even greater effect, they put the picture beneath a digital screen that shows the DJIA down 1,000 points.

That picture sends the wrong message.

In fact, I bet that picture has cost investors billions of dollars in profits.

Because when Ma and Pa Public see it, they go online or call their broker to sell.

In the news business, the more horrific the story, the more likely that it will be on the front page.

Not only do I hate that picture, but it’s also downright stupid. And here’s why...

Paying for the Right to Buy

I love shopping at Costco.

I never thought I’d pay a membership fee for the right to spend my money at a store.

Costco charges $60 a year to be a member.

That membership gives you the “privilege” of setting foot in their warehouse.

There are Costco employees at the entrance, making sure you show them your membership card.

If you're not a member, you have no shot at getting in.

Think of how absurd that is. But is it?

Members save way more than the $60 membership fee with lower prices.

And Costco members are loyal. The company has a very high retention rate. Once someone becomes a member, the odds are very high that they’ll stay a member for years.

There's even a Facebook page for Costco zealots. It's there that they post comments about the latest items Costco is selling.

They also share their love for everything Costco. If you think I’m joking, just see for yourself.

A few months ago, I was at a friend’s house for dinner.

When dessert time came, he took out three biscotti wrapped in a cellophane package. “You gotta try these — they're amazing,” he said, tossing me a pack.

I ate them, and he wasn’t kidding.

The next day, I stopped by Costco, and I made a beeline for these biscotti.

I tossed six boxes into my cart as quickly as I could.

And I smiled the whole drive home.

Do you get why I hate that picture?

It's because it's sending the wrong message to millions of investors!

When stock prices are lower — and especially when they're sharply lower — why show a picture of someone looking like a school-yard bully just stole their lunch money?

Lower prices give intelligent investors the opportunity to buy more at bigger discounts. So, why the heck would that make anyone sad?

When I walked to the aisle and saw a lower price on the biscotti — which just a few moments ago, I was willing to pay more for — I wanted to do a jig.

Something that I wanted and was willing to pay $8.99 for was now selling for much less.

Instead of buying just one box, I grabbed the most I could buy. I had no idea if or when they'd be offering a discount like that again, and I wasn’t going to take the chance that they wouldn't, so I bought.

Why is this any different from buying stocks or pieces of a business?

If my research showed me that Apple shares are a good value at $160 per share, why wouldn’t I be tickled pink when they're available at $140 and $130?

For the past few months, I’ve been making a list of companies that I would love to own.

These companies are world-class leaders in their industries and have solid balance sheets.

But what's been holding me back from sharing them with you? They haven't been trading at good values. No way was I going to pay $1 to get $1.50 of value — that's the quickest way to the poorhouse.

I’m only looking to buy them when I can pay $0.50 and get $1 of value. The recent sell-off still isn't steep enough — I would love to see the market down another 10% or so.

Then, we’ll back the truck up to buy as much as we can.

There aren’t many stocks in our portfolio that are cheap enough just yet. But combing through our portfolio, there are few that are looking attractive.

These companies have great businesses with solid balance sheets and are trading at attractive prices.

If you already own them, now would be a good time to add to your positions. If you don’t own them, Mr. Market is giving you a gift.

Every downturn in the market sets the stage for huge returns over the next few years.

You can’t have a rose garden without having thundershowers a few weeks before.

I have no idea when this downturn will end. But if you don’t act soon, you might miss it.

And who knows when you’ll have this chance again...