Why Bitcoin Is in a Bubble

Why Bitcoin Is in a Bubble

“Fools rush in where angels fear to tread.” — Alexander Pope

In the early 1970s, it hardly snowed in New York City.

That was a bummer for us kids who were in grade school.

It meant no snow days.

And no snow days meant no staying home from school, no snowball fights, and no watching television all day.

We had a few dustings, but nothing worthy of closing down schools for the day.

But when I was in fourth grade, we did have a very nasty ice storm.

It started on a Sunday afternoon. The streets, trees, cars, and everything outside were covered in an inch of ice.

By Monday morning, conditions were even worse. It was also freezing. Temperatures dropped to the low teens. But despite the ice storm, New York City schools were still open.

No matter how much we tried to persuade my mom, staying home from school was not an option.

I whined as best I could, “But mom, no one’s going to be there.”

Mom replied, “Then you’ll be the only one in class, and you’ll have the teacher all to yourself.”

That surely wasn’t making me get dressed any faster…

My brother and I waited on the corner for the bus. It was really cold.

The owner of the newsstand on the corner took pity on us. He let us wait in his store for the bus.

When we finally arrived at school, there was hardly anyone there. I went to my homeroom, and there were only two other students there. They both lived down the block.

Instead of a class of 30, we were a class of three. And then Mrs. Friedman arrived…

Mrs. Friedman was an old, angry woman. A battle-ax, you might say. She’d been teaching since the Great Depression.

Looking back, she was an excellent teacher. She was stern and tough.

Looking around the room, Mrs. Friedman’s stare was icier than the ice storm outside.

“Where are your fellow students?” she demanded. “How am I supposed to teach my lesson plan to just you three?” I don’t think she was expecting an answer. “If Mrs. Friedman can take two subways and make it to school on a day like this, you children should be able to, as well.”

Poor Mrs. Friedman. She was just letting off steam. Why be stern with us? We were in school. She should’ve been yelling at the kids who’d stayed home.

My message today, like Mrs. Friedman’s, isn’t meant for you. But like her, I want to be stern and tough because I want to make sure you don’t fall into a money-losing trap.

My message is directed at the fools who are putting their money into Bitcoin and other cryptocurrencies.

As a subscriber to Park Avenue Investment Club, you’ll set yourself apart.

Most financial newsletters tout making zillions of dollars by trading options, buying penny stocks, or the latest fad of the day…

After you buy these services, you get to really see how useless they are.

I spend dozens of hours researching companies, speaking to my contacts, and reading some more.

Before I make any recommendation, I ask: Would I invest my mom’s money in this stock? If I can’t say yes to that question, the stock will never appear in my newsletter.

I wonder if other services ask the same question. Because if they did, they would have saved their subscribers tons of money by avoiding cryptocurrencies.

How so? I’ve asked people who trade Bitcoin to answer one question for me: How much is Bitcoin worth?

I’m not asking to know what it’s currently trading at — that’s the price. I want to know what the actual value of Bitcoin is.

So, is its current price a bargain or is it still too high?

So far, no one has been able to answer me. Instead, they give me reasons why the price should keep going up.

Bitcoin looks like it’s in a typical asset bubble that’s in the process of bursting:

Stefan Hofrichter, the head of Allianz’s Global Economics & Strategy, wrote a paper on eight criteria for determining if an asset is in a price bubble. Click here to read it; it’s an eyeopener. 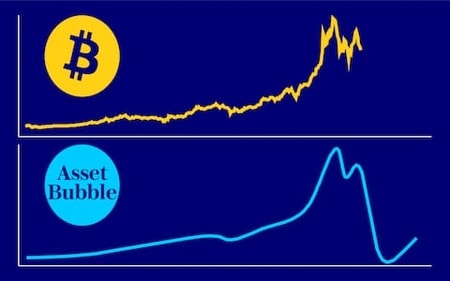 My Trifecta for Investing

Before I invest in anything, I make sure it meets the following criteria:

And if I can’t understand and value something, then I shouldn’t be investing in it.

For Bitcoin, I stopped after the first criterion. I simply can’t understand it…

So, I stopped wasting time thinking about it and moved on.

My job is simple: Find stocks that are financially sound and are trading at bargain prices, and recommend them to you…

And that’s why today, and today only, I’m offering you an incredible bargain to become a member of my exclusive Park Avenue Investment Club investment service.

I had to fight with my publisher, Brian Hicks, to offer this deep discount. And I had to make him a promise so he’d let me offer you this discount: I have to buy him a pair of premium Allen Edmonds business shoes.

Why Allen Edmonds? Because the price for a pair is the same as the Park Avenue Investment Club membership price that I’m offering you today.

You see, I could easily charge up to $5,000 for Park Avenue Investment Club and still have people lining up to get in.

So, I'd like to get you in at the charter member rate of just $299 — a 94% discount on what other folks will have to pay for it in the future.

This is a limited-time offer. So, I’m urging you to take advantage of it this very second.

I’ve set up a quick and easy method for you to become a member and to receive all my exclusive reports today.