During the late 1970s, Warren Buffett was hardly a household name.

In 1979, the Berkshire Hathaway annual shareholder meeting was held in a fourth-floor lunchroom, the biggest space available at a Berkshire-owned Omaha business, and plenty big enough for the score of people expected.

A hand-lettered sign was taped to the double doors: “Meeting in progress.” Alongside the vending machines and a coffeemaker, Warren Buffett called the meeting to order.

As chairman, Buffett went through the perfunctory official business in about five minutes, and then some of the people left. “I’ve got an hour, and if anybody wants to stick around and talk about the investment business, I’m available,” he told those remaining.

Buffett and Berkshire have come a long way since then. 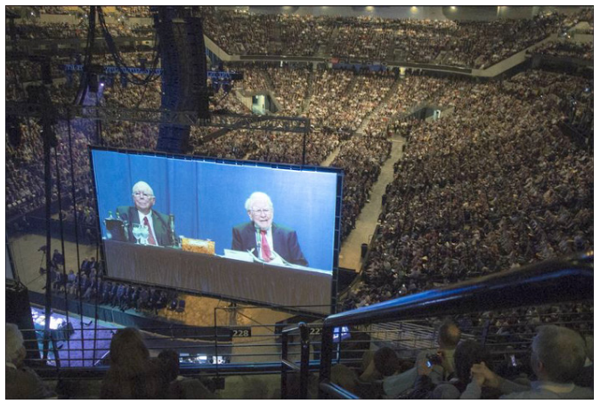 In 2016, for the first time ever, the annual meeting was live-streamed on Yahoo Finance — one estimate put the online audience in China alone in the millions!

After hearing Buffett speak in 1979 in the lunchroom of National Indemnity, one attendee invested $12,000, his life savings, in Berkshire. What impressed him most was how Buffett explained things. “He was like a professor. He was able to make it real clear.”

One of Buffett’s great gifts is simplifying complexity. He is able to get to the heart of the matter rather quickly and make it very palpable for the average person to understand.

In 1977, Buffett was invited by his friend Professor Jack McDonald to speak to his class at the Stanford Graduate School of Business.

One the students, Tim Bliss, jotted down notes on Buffett’s presentation. One of the points Buffett stressed was that there is “no correlation between hard work and intelligence, maybe [even an] inverse relationship.”

To most investors, this would seem rather odd, since the popular perception is that hard work and high intelligence are the cornerstones to investing success. And it seemed kind of a crazy notion that working harder and being smarter would lead to poor results.

Throughout my investing career, I’ve come to the conclusion that Buffett is right.

I’ve met many successful investors who worked no more than 30 hours a week, and odds are they didn’t graduate in the top half of their class.

In fact, Long Term Capital Management had a list of 16 partners that included two future Nobel Prize winners and PhDs from MIT and Harvard. Yet in September 1998, the firm collapsed. The Federal Reserve Bank of New York organized a bailout of $3.6 billion by the major creditors to avoid a wider collapse in the financial markets.

If you take the 16 of them, they have about as high an IQ as any 16 people working together in one business in the country, including Microsoft. An incredible amount of intellect in one room... [They had] hundreds and hundreds of millions of their own money up [at risk], super-high intellect and [were] working in a field that they knew. Essentially they went broke.

If hard work and intellect will get you only so far, what makes for a successful investor? Temperament.

Buffett did say that there is a tremendous correlation between approach, temperament, and success. Money can be made in the stock market if an investor possesses the following qualities:

Putting it all together, however, may be easier said than done. In the coming weeks, I'll show you more ways to become more Buffett-like in your investments, because the absolute last thing you should have to worry about is whether you're overpaying for your stock.