You Need an Edge to Make Money

I've never thought of myself as an "expert."

And after 35 years of experience on Wall Street and managing hundreds of millions of dollars of clients' money… I still don't.

Because as much as you think you know, the stock market will find a way to humble you.

And that's why I cringe whenever I hear some guy call himself an "expert."

A lot of people who claim that they're experts have as much experience in finance as my gardener does.

First off, 95% of the so-called newsletter "experts" out there have never worked on Wall Street a day in their lives. They've never set foot on it. In fact, most of them couldn't even find it on a map.

I first went down to Wall Street when I was 20 years old. That's when I started to trade for my own account as a floor trader on the New York Futures Exchange (NYFE).

I then spent the next 30 years on Wall Street and in New York City's world of finance.

I started my own money management firm, Hampton Investors, in New York City when I was 24 years old. My client list included some of the biggest banks on Wall Street, like Goldman Sachs, Credit Suisse, and Citicorp.

And I grew my firm to over $200 million in assets through market booms and busts.

With this success, Barron's ranked me the No. 1 money manager in America.

That rank was based on actual performance, not paper trades or hypotheticals.

That's my point. Most of these newsletter "experts" have never managed a single dollar of anyone's money.

And yet, folks actually take their advice. To me, that's just crazy. That's like letting a surgeon who's never touched a scalpel operate on you.

You simply wouldn't do it…

The More You Know, the More Solid Your Investment

My experience as a floor trader, as a money manager, and as being ranked one of the top advisors in the country has taught me one important thing: To make money in the stock market, you need to have an edge.

So, what's my edge when it comes to selecting stocks? It's information. 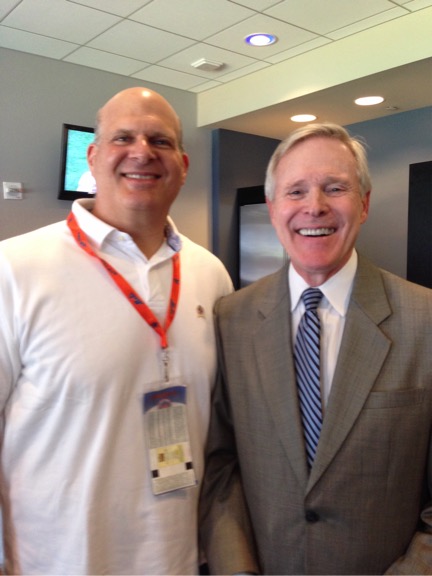 Me with Ray Mabus, former secretary of the U.S. Navy.

Because of my network of Wall Street insiders that I've built over three decades, I have access to information that the "experts" would kill for.

When I want to learn about a company, a technology, or any new investment, I make a few phone calls. And within a few hours, I can get information on it that the average investor could never get.

Combined with my 35 years of market insight, I can connect points that most "analysts" don't even know exist. And that helps me in finding the stories Wall Street can't even see.

I'm not here to toot my own horn. My track record speaks for itself. I'm telling you this so you can be a wiser investor. Information is king. And if you want to learn more about how my stock picking system works, join me on September 27th.

We'll be hosting a free webinar where I'll not only reveal the secrets to my success but also the one stock you should buy now.

I'm still putting on the final touches. So, stay tuned to learn how to participate.